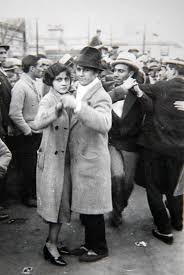 Rivkele, Rebeka
Music: Z.Białostocki, Yiddish text: unknown
Olga Avigail & Tango Attack
vocal: Olga Avigail, piano: Hadrian Tabęcki, bandoneon: Grzegorz
Bożewicz, guitar: Piotr Malicki
Performed in Cultural Center Wilanów Warsaw
...(from Polish Jewish Cabaret):
The tango Rebeka was perhaps Polish Jewish composer Zygmunt
Białostocki's most beloved and often-recorded song. It's said that
people requested it so often at the nightclubs, they would request it a
second time while it was still playing the first time! Bialostocki used
snatches of familiar chasidic niggunim (melodies) to tell the story of a
poor Jewish shopkeeper's assistant who falls in love with a handsome
goy when he comes to buy newspapers and dreams of a better life with
him...
In Yiddish version, which maybe was sung by Tadeusz Faliszewski, Rivkele
is rejecting the love of polish nobleman, because of her attachment to
Jewish tradition

The moving Yiddish song 'Friling' (Spring) was written by Shmerke Kaczerginski in April 1943, after the death of his wife Barbara in the Vilna ghetto. Set to a tango melody, the song's lyrics tell of the author's sadness and sense of despair and loneliness. Photos were taken by me in the Jewish Quarter of Prague, except the photo of unidentified Jewish women, who perished in Shoa. from the CD Yiddish Tango Live in Jerusalem Olga Avigail - vocal Piotr Malicki - guitar Hadrian Tabęcki - piano Grzegorz Bożewicz - bandoneon
_________________________
If you are looking for more detail about this subject

1. The Way We Lived: Exploring Jewish life and culture |